So it turns out that, in addition to trying to exit important academic interviews through hotel bathrooms, I also fail spectacularly at keeping a regular blogging schedule. But in the spirit of Failing Loudly — meh. Whatever. Because after a (much needed) mid-August week of vacation at Lake Lure, North Carolina — home of the annual Dirty Dancing Festival, although (unfortunately) I missed the celebrations — I returned to a whirlwind of deadlines and meetings. And then I was launched, like a squirrel out of a slingshot, into the first week of the semester.*

I’m sure my students enjoyed my chaotic first-day-of-class demeanor, manifested primarily in desperate jokes and what can only be likened to feverish tap dancing for approval. I looked kind of like this: 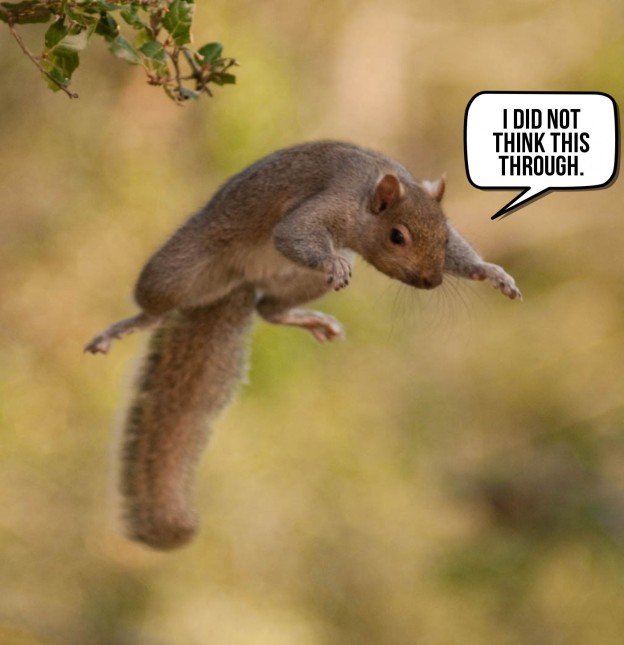 Anyway. Let’s just get on with it, shall we?

Can I request a blog post? Or maybe just a bulleted list of tips from you? I’m starting this podcasting business and my first foray into the world of freelance, which basically means “do everything on your own schedule including sleep and eat and grocery shop,” or maybe that’s just adulting. Regardless, some tips on how you make progress on huge projects with just one formal deadline. And also how to go to all my favorite coffee shops to work and not spend all my money!

(Ali is an excellent podcaster. Check out her series Professors are People Too. I am honored to be featured in episode five. Unfortunately, finding the homepage for her podcast required me to Google “professors are…” — and in case you’re wondering, the common searches look like this:

So I’m certainly not qualified for the coffee shop question, because whenever I park my laptop at Silk City Coffee in Manchester I end up with an enormous latte, sometimes one of their delicious BLTs, and often a brown butter rice krispie treat the size of my head or one of those salted chocolate chip cookies that allow you, ever so briefly and with crumbs on your fingertips, to touch the face of god. I’m happily failing when it comes to practicing self-control at the coffee shop.

But the question about working on a big project, and doing so in the vast, yawning void of unstructured time — that’s one I’m currently jousting with. (I joust with my academic problems with one of those enormous Q-Tips popularized by American Gladiators.) Book One is out the door, and Book Two is on the horizon. While I had a dissertation committee to jumpstart Book One and a tenure committee to prod it to press, I’m working without those formal support structures when it comes to Book Two, and I find that I have suddenly completely forgotten how to write a book. There are definitely words involved. And I think it involves typing, sometimes while crying?

The plan was to start Book Two over the summer. Because, in the words of Step Brothers, there was so much room for activities! I bought a new notebook. I bought a hot cup of coffee. And then the following occurred, in no particular order:

That’s probably not the bullet list Ali is looking for. But I guaran-frickin-tee you that everyone who ever stared into the abyss that is a large project, to be completed solo, can make a similar list, take or leave a few otters.

But I learned two things when contemplating what felt like a failed summer working on Book Two. One is relevant to Ali’s question, and I’ll get to that in a moment. But first: I learned that I just cannot escape the stupid posturing that is the standard behavior of the end-of-August academic. How was your summer? Oh, too short. I didn’t get nearly enough done. UGH. FAKE NEWS. While I did, indeed, practice every form of procrastination listed above and then some, that list is also incomplete and misleading. The weekend before classes started, I sat down and wrote a list of everything I accomplished over the summer, personal and professional, and I was surprised about what my brain tended to leave off the list. Like submitting tenure materials. And establishing a morning routine that didn’t send me into a stress spiral by 9 am. The gravitational pull of the unproductive summer narrative is so powerful in the halls of our colleges and universities that it will warp the facts. When someone asks you about your summer, otter videos will fill your head. You’ll discount the important days of reflection and tentative writing. You will slump under the weight of the publication that didn’t appear on your CV.

We really just need to cut it out. And I’m going to start asking a different question, since How was your summer elicits such a sad, Pavlovian response. Currently open to suggestions. I’m thinking something along the lines of What are you excited about this semester? Maybe you’re arriving on campus this September ready to finally act on all the thinking that was happening behind your eyeballs during July. And maybe you’re just really psyched about the new season of Stranger Things. I’m down with that.

But the other thing I noticed in composing the bulleted list above is that unstructured time, and the weird meandering that accompanies it — the wandering that doesn’t at all feel like work — is, for me, essential to getting a big project done. So while I don’t have a series of tips and tricks, I do have a few self-realizations (eats granola, purchases crystal) that have been helping me cautiously approach Book Two. (It bites.) So, in no particular order, here are the Things I Must Remember as I Write Book Two:

Things always take longer than I think they will, and that’s okay. Most of my life requires getting things done on a short-term schedule. On Tuesday, 40 students will be sitting in a room, waiting to talk about The Chocolate War, and I need to have something to say to them. We’re out of peanut butter. I have to prepare for a meeting that starts in three hours. I find it really difficult to transition from short-term thinking to long-term work: the messier, less predictable chronology of something big. There are small fixes for this — breaking a big project down into smaller, achievable tasks, for example, or creating a series of self-imposed deadlines — and all of those are great ideas. But I also find that I have to be very patient with myself.

One of my guided meditations (eats granola, purchases crystal) includes an affirmation about practicing patience to foster self-confidence, and it’s taken me awhile to untangle that. What is this word salad? But it turns out, at least for me, to be something like this: when I am patient with my thinking and (this is vital) with my material, words-on-the-page progress, then I am behaving in a way that suggests I am confident that I will get there. That this floundering is leading somewhere, even if I don’t know the exact destination yet. It’s a version of fake it til you make it.

I’m often working on it when I don’t think I am. My dissertation advisor used to joke that, when progress felt slow and erratic, I was “marinating.” I thought this was a gentle word to a high-strung advisee, and it probably was. But it’s also true. Book Two has been on my mind for years, and I move through the world differently because it’s there. I notice a text, an image, a news item that otherwise would have skipped over my brain like a pebble. I ask questions that would never have occurred to me before. This feels like a cop-out, but it’s not. For me, a long-term project requires really sinking into an idea, and that is happening all the time. I AM WORKING BY OSMOSIS.

Some days are detail days. Some days are broad strokes days. Book Two requires me to think on a number of different registers — from the granular (what child art was hung in Roger Fry’s show at the Omega Workshop?) to the global (what am I trying to say about childhood?) to the practical (who in hell would publish this, anyway?). It can make my work feel chaotic and unfocused, but if I don’t move among these registers, I get seriously bored. So I live with the chaos.

So join me, friends. Jump, squirrel-like, into the void. And tell me how you do it.

* No squirrels were harmed in the writing of this post.