When I was an undergraduate at American University, I wrote my honors capstone on nineteenth-century women’s poetry and the specter of infanticide. I had not yet learned to use words like “specter” to signal, aggressively, that I AM A SERIOUS ACADEMIC, so I probably communicated that idea with much less snobbery. I also hadn’t developed the hand-wringing that, later in my career, would accompany the prospect of attaching myself to a research interest. If I had, I’m not sure I would have chosen infanticide. Do I want to be the Victorian infanticide person?

“Hey, I found this reference to old-timey baby murder, and I thought of you!”

Since my BA days I’ve owned a number of specialties. It turns out you can’t really get out of a PhD program without planting a few flags. (Really, it’s hard to get into a PhD program without at least feigning a fervent dedication to Your Area.) I’m a Victorianist and a tentative modernist but, really, a fin-de-sièclist.* I’m a children’s literature and childhood studies person and occasionally a book history person who loves authorship and illustration. More specifically, I’m a child agency person, a nonsense person, and someone who knows a lot about early twentieth-century Child Study. I’m also Robert Louis Stevenson’s girlfriend. (We have a long-distance relationship.) All of those things swirl around in Book One.

Now I find myself tenured and about to enjoy a Fall 2018 sabbatical. (Hooray! Also: luxurious in a way that makes me feel weirdly guilty.) One of the great joys of the sabbatical, for me, is revisiting my research agenda — mostly because doing so involves making a list, and I really like making lists. But as soon as I penciled in the first bullet point I realized that, once again, I am planting flags. The ghosts of murdered Victorian babies reared their creepy bald heads. What should I claim? What will it mean??

Lately, I’m testing out child art. And the idea that I’m “testing out” this interest is laughable, because I’ve already committed a few years to researching gallery exhibitions 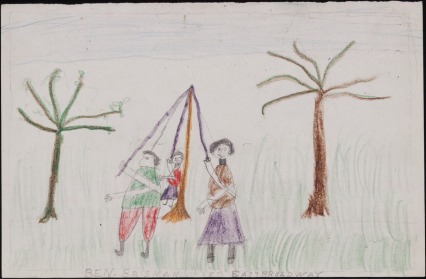 of drawings by two-year-olds. You see, I can’t seem to make myself really own this research agenda. I like it, but I haven’t put a ring on it. I tell myself that once I become the child art person — and, again, I already am this person, so this is a great delusion — I will feel the weight of my time, writing, and professionalization shift, seemingly irrevocably (lie), into a particular critical conversation, potentially marooning me (also lie) and maybe alienating me from other scholars working on other matters (another lie) that are inevitably more important (lies again).

There are pleasures in demarcating a research agenda: the eager anticipation of deep knowledge on a particular topic, the joy of meeting others who are asking similar questions, the sense that you are off in a new and potentially fruitful direction. And, of course, considering where your agenda starts and stops helps you identify moments when you proclaim, smugly, “that’s interesting but outside the scope of my research.” But because I excel at worrying about arguably great things (like sabbaticals), here are just two of the many ways I have been worrying about my research agenda:

My ideas are THE WORST. This thing I’m thinking of writing about is too weird, too narrow, or (and here is where I get really itchy) too obvious.

Let’s say I’ve bulleted in that child art project on my research agenda, and I begin working on some reading and brainstorming toward a book chapter on modernists and child art. At first, I don’t find many people who are really thinking about this question very deeply. I mean, plenty of people have noted that modernists like child art but often leave it at that. And then I start giving my new research agenda the side-eye. Why am I by myself? Oh, god, this isn’t worth studying. Others have been here and swiftly left, realizing it isn’t worth their time. This research agenda is like a Guy Fieri restaurant. It seemed like a good idea at the time, but really it’s all show and no substance and the reviews will be BAD.

Then I realize that I’ve been looking in the wrong place, because apparently to write about this I need to master a WHOLE NEW FIELD, and I start running into the work of smart people. I bump elbows with David Fineberg and his many books on this subject. I am immediately forlorn, because he knows everything and I know absolutely nothing at all. I will never know anything, in fact, and he has already written all there is to say. (More on this feeling here.)

Soon my choices feel like a cage. All is lost! I’m too far in to turn back know! Save yourselves!

The thing is, at the beginning of a new project, these two feelings — that my topic is too narrow and insignificant, and later that I am a complete know-nothing because in fact this topic is enormous and someone else’s property — are inevitable. And I need to give myself some go-to ripostes. First, what seems like a narrow research interest, perhaps even a dead end, is likely to expand outwards until it engulfs me, Blob-style.** Gallery shows by two-year-olds will lead to much larger questions, with important stakes in my field. I just have to trust my gut and wait for those questions to emerge. And when I discover that others have already identified and answered some of those larger questions, I need to be patient with myself. Those other people are not complete jerks, even though it is really satisfying to call them so, ideally in a crowded coffeeshop, while wearing headphones that mask the volume of my own desperate cries. Instead, they are fellow travelers I need to pause and learn from. (My larger questions will end up being different.) And it’s okay to pause and learn. I know this in my frightened researcher heart, but we are conditioned to fear ignorance, so it’s important to remind ourselves that learning is our business.

Even though this new project is, arguably, a New Thing for me, I feel as if write about the same thing over and over again, and there will be a time when someone raises their hand at a conference and shames me about it. YOU ARE REDUNDANT, SIR!

I felt this hard as I was preparing for this year’s Children’s Literature Association conference. Once again, I found myself uploading a picture of Jean-Jacques Rousseau into my Prezi, and once again I was grasping about for synonyms for “child agency.” I indulged in a little covert cut-and-pasting from previous work, because why reinvent the wheel? And then I thought: oh, dammit. I’m reinventing the wheel. NO ONE WANTS TO HEAR ABOUT ART EDUCATION AGAIN, VFS. Put your Froebel away.

But! It is right and logical that one project will overlap with the next. While it seems some scholars can wander desultorily and somehow successfully from Shakespeare to Sendak to systems theory, most build research agendas that have a certain coherency. There’s an animating idea hovering at the center, and a collection of ideas, texts, and objects orbit around it. But there are definitely moments when I feel like I’m in a cul-de-sac, whirling in circles and wondering why the landscape isn’t changing. Why are we still here, talking about adult-child relationships again?

I guess I’m still parsing the difference between developing a research agenda — in which I pursue a certain set of questions, examine a particular archive of texts, engage with a growing but familiar roster of scholars and theorists — and stagnating. Maybe I am the intellectual equivalent of the Bog of Eternal Stench. My ideas are kind of fetid, and if you touch me, you talk about Jean-Jacques Rousseau for the rest of your life. Seriously. He will appear in every conversation.

Part of this is definitely habit. Rousseau is a doorway into thinking about childhood, but there are certainly other ways in; I should find them. At the same time, I should respect my own work; I’ve been building a foundation in my field for awhile now, and yes: sometimes I can rely on pathways I’ve already built.

So I have created a Rousseau tag for the blog. He’ll return again and again. Is he a beacon or a warning? What have others already said about him?

I’ll be in my apartment all summer, worrying about it.

* IDEA: the fin-de-cyclists. Are we a biker gang with leather jackets lined in purple silk? Do we win the Tour de France and then act really bored about it? Who’s with me?

** Clémentine Beauvais once drew a wonderful cartoon about this process — the way one small, manageable idea quickly expands into something overwhelming — and I haven’t been able to relocate it. If someone knows its whereabouts online, please let me know!